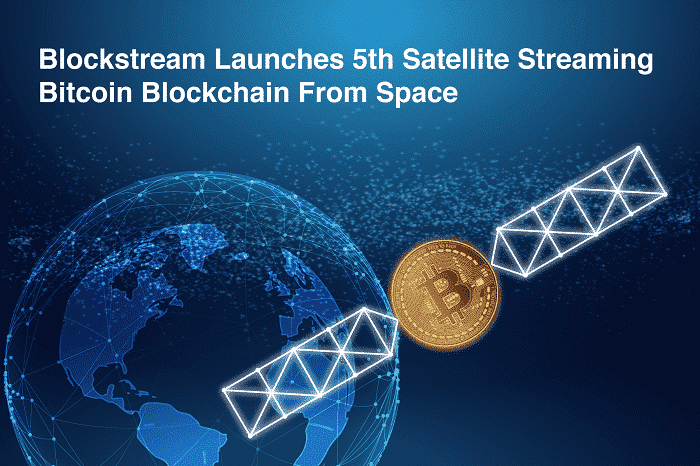 A completely new era of Bitcoin is about to begin since the users across the globe will no longer require having access to the internet in order to make cryptocurrency transactions.

Blockstream is a blockchain development startup which raised $101 million from Khosla Ventures. According to a recent report published by Forbes, Blockstream has expanded its satellite services and started streaming Bitcoin Blockchain from five satellites. These satellites are positioned in orbit around the earth to reach major landmasses in the world except for Greenland and Antarctica. Earlier Blockstream had only four satellites which were streaming for North America, South America, Europe, and Africa.

Addition of the fifth leased satellite provides a wider coverage which can serve potential internet free sharing information and Bitcoin transactions to the users of Asia Pacific Region. The new API (application programming interface) lets users exchange their encrypted messages with each other from remote regions of Asia Pacific and pay in bitcoin (micropayments) for those messages using Lightning Network. The lightning network enables micropayments and onion-routing technology, similar to Tor browser which allows users to exchange messages wherein sender, receiver and content are protected from 3rd party surveillance.

Now that Bitcoin is about to enter its tenth year with struggling prices and probably an uncertain upcoming future, the cryptocurrency has got free of internet and its service providers. Samson Mow, CSO Blockstream explained the move by saying, “Bitcoin has always been about uncensorable money, and now we have uncensorable communications as well.”

According to Forbes’ outlines, Bitcoin space initiative seeks to make crypto usage free from the dependency of the internet and build robust security of Bitcoin Network. “We see the increased robustness of the bitcoin network and the lower cost of participation contributing to helping businesses rely on the service for backup, and for emerging markets to use as their primary access to the bitcoin network at a lower cost.” said by Adam Back, CEO of Blockstream.

Adam Back also expects that new satellite along with the API will result in the increased development of smartphone applications that can link with Blockstream’s GreenAddress Bitcoin wallet and its liquid network. This will serve faster transaction between exchanges and cryptocurrency data feed in real time and historical Bitcoin exchange data, built in the merger of ICE (Intercontinental Exchange) and New York Stock Exchange. Miners will also be able to utilize satellite services in order to generate new blocks and receive payments in Bitcoin. Adam Back said, “You could set up a bitcoin mining operation in the middle of the desert powered by solar.”

Blockstream continued to develop a global payment infrastructure focussed on serving the unbanked economies, while the adoption of cryptocurrencies by enterprises has increasingly taken place in form of large hedge funds.

Blockstream first announced about its satellite project in August 2017. It had also explained its aim to bring the potential to “connect everyone on this planet” with limited internet global access and more limited online freedom.It is a less expensive way to get connected to the Bitcoin market and participate in crypto-economy. The all-new Blockstream Satellite functionality can directly connect the internet interconnected substitutes in isolated regions across the globe. Samson Mow said “Everything that Blockstream is doing is to augment Bitcoin making it more robust. That is the real key to long-term growth. It may not impact the prices next year, but it will definitely impact the prices 10 years from now because all these products and services connected to Bitcoin, will make it easier and stronger to use”.

Other than Blockstream, many start-ups like AirTM in Mexico are helping hyperinflated economies to store the value in Bitcoin. AirTM partnered with Zerocoin Electric Coin Company in April 2018, to make zcash safer for countries like Venezuela to anonymously use cryptocurrency. In September 2018, merger-backed Bitpesa announced its venture with SBI remit to develop a payment gateway between Japan and Africa for exchanging money using Bitcoin Blockchain.

“Coinbase Earn,” an educational program for crypto users to learn beyond Bitcoin