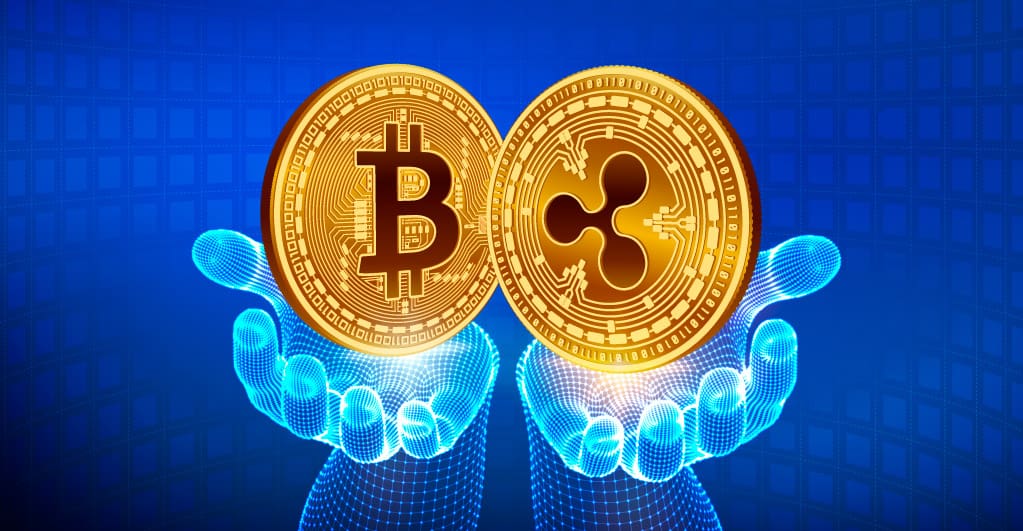 Both Bitcoin (BTC) and Ripple’s XRP are cryptocurrencies or digital currencies. The significant differences between these tokens lie in their functionalities, the underlying blockchain technologies, algorithms, prices, and the time taken to complete transactions. Let’s understand the major differences to determine the crypto token for your needs.

Bitcoin is the first decentralized, open-source cryptocurrency created in 2009 by a person or a group under the pseudonym Satoshi Nakamoto. It is the first blockchain technology-based distributed ledger. Bitcoin mining is the process of creating Bitcoins (BTC.) At the time of writing this article, 18,595,050 Bitcoins have been mined. Once this number reaches 21 million, no more Bitcoins will be mined.

Initially released in 2012, Ripple is an RTGS system (Real-time Gross Settlement). It is an open-source distributed ledger used to create digital tokens called ripples, which are now known as XRP. Unlike Bitcoin, the Ripple distributed ledger created a total of 100 billion XRP all at once.

What Is the Difference Between Bitcoin and Ripple (XRP)

Let’s first consider the objectives of both cryptos. Bitcoins were created using blockchain technology on a decentralized platform. The goal was to create a decentralized digital currency as an alternative to fiat currency—Bitcoin is not controlled by a central authority like governments and banks. That said, Bitcoins are used for online transactions and as speculative investments via Bitcoin trading.

Ripple’s platform is a distributed ledger that was used to create the cryptocurrency XRP. Ripple’s main objective is to facilitate low cost and faster cross-border transactions. That said, the Ripple platform is used for facilitating fiat currency payments between banks.

With many individuals and organizations accepting Bitcoin payments, the virtual currency has already established its mark in the mainstream. While there are businesses that accept XRP for online payments, the active use of RippleNet is noteworthy. Bitcoin is an alternative for fiat currency, while the Ripple payment system facilitates faster and low-cost cross-border payments.

Some of the banks like Santander, the Commonwealth Bank of Australia, Axis Bank, and JCB have embraced Ripple and are already using the Ripple Network for global payments or cross-border money transfers.

Now, let’s see how cross-border transactions occur via the Ripple payment network. While the banks convert the currency to USD, Ripple uses XRP to enable money transfers between different currencies. Thus, eliminating the exchange fees and speeding up the transaction process. Ripple facilitated international money transfers are completed in 4 to 5 seconds.

Bitcoin’s algorithm for proof of work mining, also known as SHA 256 (Secure Hash Algorithm 256), is the driving force enabling its operations. On the other hand, Ripple uses the Ripple Protocol consensus algorithm. While Bitcoin mining consumes a lot of energy, Ripple is faster as there is no mining involved and, thus, very low energy consumption.

Now, let’s consider the transaction time of both currencies. On average, the time that is taken for completing Bitcoin and Ripple (XRP) transactions are 10 minutes and 4 seconds, respectively.

Here’s another example of the active use of both cryptos. John holds Bitcoin tokens. He can use these tokens for making online purchases or for speculative investments. Now, John has XRP tokens. He can trade them for speculative investments. However, when John, who lives in London, must send $500 to Jane living in Sri Lanka, he can convert $500 to equivalent XRP and send it across to Jane via the Ripple payment network. Upon receiving the tokens, Jane can either store them as XRP or convert them to USD.

Where Can I Spend Ripple’s XRP?

Unlike Bitcoin tokens, XRP’s main objective is to facilitate low-cost, faster international transactions, according to XRP News. Nevertheless, XRP has found uses as a currency similar to Bitcoins. Some of the online merchants accepting XRP as payment for online transactions include MrChrissyCloud (Cloud Services), Crypto Cove and Cryptoholic Shop (e-commerce fashion sites), Henley Audio (Electronics), among others.

Apart from the above-mentioned uses, Ripple is predominantly used for low-cost international transactions. Readers are advised to refer to the example provided earlier to understand how XRP transactions work.

How Can I Invest in Ripple—and should I?

The ripple payment network is speculated to garner wide-scale application as a cost-effective instant money transfer service between different institutions and countries. The demand for XRP is predicted to increase as the tokens fuel the Ripple network for completing transactions. Bitcoin transactions take up to 15 minutes, owing to mining and its algorithm, as stated earlier. On the other hand, you can send currencies to different countries in under 5 seconds with the Ripple network. Thus, investing in XRP or other cryptos is a good option for diversifying one’s financial portfolio. Before investing in it, you can check XRP Price prediction by experts.

Ripple, although decentralized, is owned by Ripple, which is a private company, while Bitcoin is a public ledger. Ripple and Bitcoin’s ledger systems also differ in terms of functionality and algorithms. While investing in XRP, BTC, or other cryptos is a good option for diversifying one’s financial portfolio, we advise you to invest the sum you are prepared to lose—it’s a volatile market, and investments are subject to market risks and speculations.

Your Go-To Guide for Crypto Casinos: Advantages and Flaws